Death is not found behind mountains
but right behind our shoulders

Russian is my main language. Otherwise it is called native, some authors call it first. Though, if you speak 3 languages since kindergarten and can not remember how did you learn them, all three can be considered as native ones, some of them as first (the one in what your mam had sang you lullaby). Other(s) - as main, that is the one you used at school and work to do the following:

Historically there has been only one official version of the Russian language -- state language of Russia. Some researchers call it the language of A.S.Pushkin (1799--1837), supreme Russian poet. Though Russian is spoken all over the ex USSR with different accents and pronunciation, every Russian speaking community uses unified standards in newspapers, mass media communication, business contacts or official relations, including industrial terminology. For example, the Russian for a bore-hole is буровая скважина, and remains unchanged in every part of the ex USSR. Russian spoken in Georgia slightly differs from Russian in Central Asia by accent only; Russian within Central Asia also has several versions of pronunciation. But there are common standards every speaker should follow. There is no Georgian-Russian, Armenian-Russian, or Kazakh-Russian. There is only one Russian – it is Russian, that’s all.

Unlike the Spanish for bore-hole, which has several official names in different countries: calicata, agujero, barreno, pozo, perforacion. One Chilean colleague shared with me his software localization concerns: “Spanish-speaking users just start arguing on every single term in a menu in Spanish”.

Having a Russian copy of this site is a good idea and a plan for distant future. It depends on a return expected in the Russian World. There are also concerns of technical character about which I would like to narrate below.

In mathematics, ratio is a relationship between two numbers of the same kind (e.g., objects, persons, students, spoonfuls, units of whatever identical dimension), expressed as "a to b" or a:b, sometimes expressed arithmetically as a dimensionless quotient of the two[2] that explicitly indicates how many times the first number contains the second.

According to the very Wikipedia:

A taboret (also spelled tabouret or tabourette) refers to two different pieces of furniture: a cabinet or a stool.

Both definitions are cut in stone, aren't they? Indeed, they are, but not on the Russian Planet.

Ratio is dimensionless. Let's look at what do folks of INDIANA ECONOMIC DIGEST say about it:

Twice, or 2 times, is just a dimensionless number opposed to 2 metres per second or 2 sestertii per hour. This year farmers compare proposed bushels of corn with bushels of corn of the last year harvest. That is, bushels to bushels, apples to apples, and not apples to bananas. The rule of expressing ratio applies everywhere on Earth, including Russia. Though, not everywhere in Russia. Particularly in Russian mining, where strip ratio is dimensional unit, which is cubic metres per ton. Nevertheless, they still call it a ratio.

A dialogue from my army life:
Me:
- Comrade Sergeant, you should spell tabOUret rather than tOUbaret.
Sergeant:
- Private C! Probably in your country-side it is tabOUret, but in this army unit it is tOUbaret!

Unfortunately Russian mining terminology is not so precisely structured, as a design of tabouret with pieces of wood joint together by means of dovetails.

At this moment, writing in Russian about mining is something like surfing along the crest of seething event horizon of developments in the middle of a geopolitical black hole called Localization Standards.

Nevertheless I am open to communicate in Russian and I'm up in arms to discuss the topics with potential Russian speaking clients. Moreover, I would render consulting services to a hypothetical RNCPMT should anyone of them wish me to do so. Though, s/he who hangs doubt on my competency in this particular point, may stare at my high-school marks (for Russian as my native language) on having clicked on the thumbnail below. 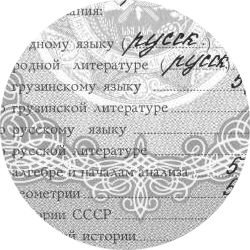