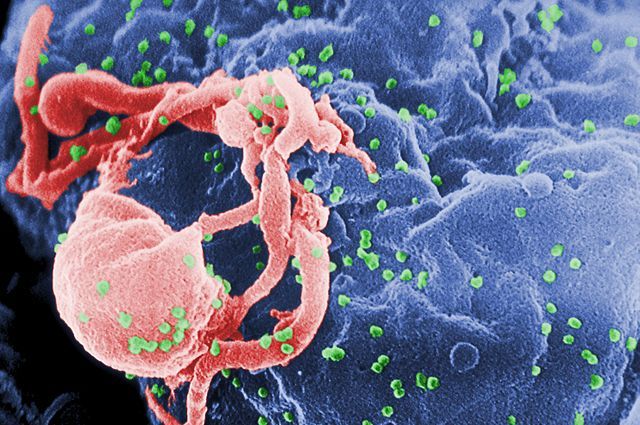 Scanning electron micrograph of HIV-1 budding (in green) from a human cell.

In DNA dig, scientists unearth more viral code, which makes up >8% of our genomes.

In the current era of microbiome research, us humans are already having to come to grips with the fact that ‘I’ is actually ‘we’. Instead of our bodies constituting a single life-form, we are each comprised of complex and diverse ecosystems of microbes that have a profound influence on our existence. Our health and wellbeing are not just determined by what our own cells do, but what our trillions of invisible inhabitants do, too. And the genetic blueprints that govern our biology are partly carried in those microbial inhabitants, as well as in our own cells.

But, as it happens, the DNA in our own cells isn’t solely ours, either. More than eight percent of the human genome is not human at all—it’s from viruses. And scientists are still digging up yet more viral code from human DNA that may well influence our lives.

In a new study this week, researchers analyzed the genomes of more than 2,500 people and found 19 never-before-noticed segments of viral genetic code. Some of that viral DNA may have been traveling down human lineages for at least 670,000 years, the researchers reported in the Proceedings of the National Academy of Sciences.

Most of the genetic sequences are mere remnants of long-gone viral particles. Still, previous research has found evidence that such fragments may influence the development of diseases, such as cancer and autoimmune disorders, based on their activity or placement near human genes.

But, perhaps more interesting, the researchers also found a segment of viral code that appeared to be completely intact and, when activated, may resurrect an ancient virus.

"This one looks like it is capable of making infectious virus, which would be very exciting if true, as it would allow us to study a viral epidemic that took place long ago," senior author and virologist John Coffin, of the Tufts University School of Medicine, said in a press release.

The researchers are now working out whether the code can generate a fully functional virus. So far, this gene segment, dubbed Xq21, is only the second known instance of a complete viral code—called a provirus—lurking in the human genome.

The researchers started their molecular dig to find viral fragments after several previous studies had hinted that they may be involved in disease. These sequences, called human endogenous retroviruses, or HERVs, are actually DNA versions of RNA-based viruses that permanently lodge their code into human DNA—a class of viruses called retroviruses. (HIV is an example of a retrovirus.) Over time, the viral codes break apart from mutations, deletions, and/or recombining with other DNA fragments. Nevertheless, they can still have effects—they may mess up nearby genes, become partly activated and contribute to disease, or evolve into new genes that are co-opted by human cells.

"Many studies have tried to link these endogenous viral elements to cancer and other diseases, but a major difficulty has been that we haven't actually found all of them yet," said co-first author Zachary Williams, also at Tufts.

To find more viral sequences, the researchers used two new DNA analysis techniques that look for hybrid DNA fragments and seams of where viral DNA patched itself in. Such pieces may have been discarded in previous analyses as garbled code. The method not only found 19 new viral fragments, it confirmed 17 previously identified fragments—which helped assure researchers that the method works.

Of course, not all of the fragments were found in all of the genomes surveyed. In fact, some were only found in a few genomes, while others were present in more than 75 percent. The provirus, Xq21, found on the X chromosome, appeared to be in 44 samples.

While the researchers work to see if the forgone germ can be revived, the researchers are hopeful that their method could be used to study more ancient, viral remains that litter our genomes.